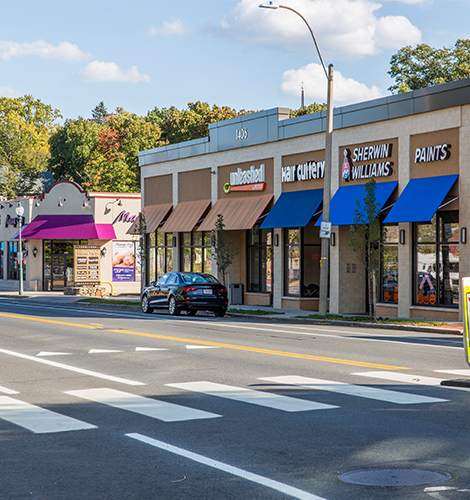 Bierbrier Development faced four major hurdles in the development and leasing of Arlington Village Shops. The first was to win the bid for the land at public auction. The second challenge was to develop a marketing concept with parking that enabled national credit retailers to see the value of locating in this desirable and dense community. This was followed by the resolution of a difficult permitting process with active participation and potential opposition from neighborhood residents. Finally, severe flash flooding of the surrounding area that threatened the feasibility of the project needed to be resolved.

Bierbrier Development had the vision to see that Arlington was under-served in the retail arena. Feeling confident that if typical suburban parking could be provided, national credit tenants would be attracted to the site; a vision not shared by other developers. Indeed, Bierbrier was the only bidder at the auction with the Massachusetts Bay Transportation Authority (MBTA).

To create marketing appeal to the national tenant world, Bierbrier developed the “VILLAGE RETAIL” concept, offering a streetscape retail center, contemporary in design with an abundance of parking at the rear of the site. Together with a nearby municipal lot, this made the retail space highly marketable and when the center was complete, it opened with 100% occupancy. This concept had provided a unique differentiating platform for these national retailers who could not previously locate in Arlington, notwithstanding its favorable demographics, because prevalent storefront space had limited on-street parking only.

Participating in a demanding permitting process, Bierbrier worked closely with town officials and a team of design professionals to successfully negotiate many compromises and assure the project moved forward. To calm the concern of nearby neighbors, Bierbrier’s creative decision to build a mini-forest shielding the rear of the center from the view of these neighboring residents, ultimately influenced the granting of the necessary permits.

Finally, the site was challenged by severe flooding due to the removal of the existing pavement which covered the lot. Working with a team of hydrology experts, Bierbrier came up with a solution that effectively waterproofed the building and parking lot which included a protective belt around the building and the installation of new drainage and underground pipes. In addition, when adjacent property was purchased, floating drainage basins were installed. Because the site was formerly used by the MBTA for bus parking, Bierbrier was faced with the additional challenge of remediation of various contaminants, resolved through an extensive Activities and Use Limitation Easement.

Because of the success of the initial shopping center, Bierbrier purchased the adjacent property and began permitting to double the size of the center. A second series of permit hearings followed, complicated by a zoning decision joining both of these parcels. Due to the strong support of the neighborhood, voiced in person at the public hearing, reflecting the satisfaction of the Arlington Redevelopment Board with the first phase of development, the permit for this second phase was granted unanimously. Phase two of Arlington Village Shops opened fully tenanted with national chain stores confirming the original "VILLAGE RETAIL" concept.